WHY ARE CAPITAL PROJECTS OFTEN LATE AND OVER-SPENT? PUTTING THE PUZZLE TOGETHER 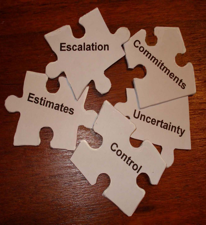 The implications of overspending on capital projects and of late delivery by such projects can hardly be overemphasized. One mining corporation, for example, budgeted US$ 6,9 billion to be spent on projects during 2007 and the profitability and even the feasibility of these endeavours obviously depend on executing the projects on time and within budget. Yet, it cannot be disputed that many major projects are late and/or over-spent when measured against estimates and commitments made early in the project lifecycle. Figure 1, for example, illustrates the cost performance on major transport projects completed during the previous century. At face value Figure 1 seems to suggest that the establishment of project management as a formal discipline since the 1950s and the associated volumes of research papers did little to improve cost overrun in practice. The reasons for overspending and for delays have been studied in some industrial settings such as major transport projects globally 1 and construction projects in India 2 but there is no evidence yet of such research being performed for any South African industrial sector.

A solution to the problem of not meeting cost and time objectives has potential to be used as a strategic weapon in a competitive business environment but why has the problem not yet been solved? The answer can probably be found in the complexity of the problem as well as in the nature of research that is typically done. 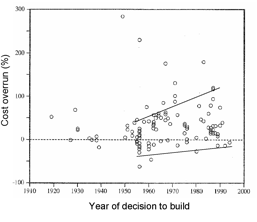 Some practitioners attempt to explain overruns and overspending simplistically as the result of risk and uncertainty but the fact that some projects - also high-risk projects - are sometimes completed well within budget and on time, opposes such a proposition. The problem is indeed complex: a large number of factors play a role in project performance.  These factors would typically include aspects such as unproven technology, unforeseen events, poor performance by subcontractors, failure to use appropriate, known methods and the hard reality of actual cost and activity durations deviating from estimates. “Soft”, interpersonal problems such as lack of leadership, delays in decision making, team dynamics, and other organizational issues also play a role. Moreover, these factors interact in complex relationships. One would also expect that the factors would typically vary between industries and it would therefore make sense to focus research on a solution for a specific sector such as the SA resources sector or, more realistically, a sub-sector within this sector.

Where several disciplines are considered, the effects of a list of several factors on project success are normally studied. This type of research typically involves surveys to establish perceptions of the role of up to 50 or more factors on project performance. One emphasis of such quantitative research is obtaining a large enough sample of respondents to be able to justify the results statistically as preferred by many academic journals. Even though this type of research commonly does study the effects of multidisciplinary factors, scores of other factors (that are implied in methodologies, textbooks, standards, maturity models, scientific papers and competency frameworks to affect project performance) are typically not addressed. Furthermore, a theory is to a large extent based on causal relationships 6 i.e. relationships between “causes” and “effects”. However, such causal relations are seldom addressed in surveys on project success factors. Little evidence can be found about attempts to solve the problem of overspending and late delivery by synthesis of a comprehensive list of factors from a variety of sources. An approach based on synthesis and integration of a broad range of factors that are already acknowledged within the discipline of project management is described below.

The proposed approach calls for the active involvement of an industrial sector and involves the following steps for the particular sector:

Step 1 involves the compilation of a generic list of proposed causes of project delays and cost overruns that can be found in literature, from existing project management theory and from experience gained within a specific industrial sector. The objective of this step is not to assess the relative importance of these causes but rather to create a comprehensive list of possible causes. Likely causes of delay or overspending for a specific industry or project are addressed only by subsequent steps. Each project case is unique and so will be the causes of overruns and delays.

For Step 2 the list of proposed causes needs to be checked against the realities of a specific sector. For this step to be valid, practitioners from the specific sector need to be involved and they have to be pacified that the study would not be used to expose any mistake they have made, and also that they would not be exposing any weakness of their organisation. The Delphi technique 7 is often - based on certain misconceptions - criticised as a research tool but it provides a suitable method to obtain inputs from practitioners within a relevant industrial sector.

A number of techniques exist for Step 3: identifying and explicitly illustrating the relationships between causes and effects. These include:

The simplest technique is the Ishikawa diagram but, as can be expected, the simplicity renders it the least valuable for this purpose. Causal loop diagrams are used to analyse and simulate complex systems 8,9 and both causal loop diagrams and current reality trees are useful in this instance. The technique of current reality trees has the advantage that it scrutinizes whether a specific combination of causes are sufficient to lead to a specific effect10,11. For example, to obtain the effect of fire, three causal elements are required to warrant sufficiency: fuel, oxygen and a spark. Figure 2 represents a simplified cause-and-effect diagram for illustrative purposes (effects at arrow heads and causes at arrow tails). The oval circling the five arrows on the diagram indicates that commitments made before appropriate planning is done, combined with uncertainty, commercial and political agendas (e.g. “buying in” by quoting optimistic estimates to ensure that the project will go ahead) and the effects of a deterministic approach, are sufficient to cause insufficient allocation of contingency reserves. 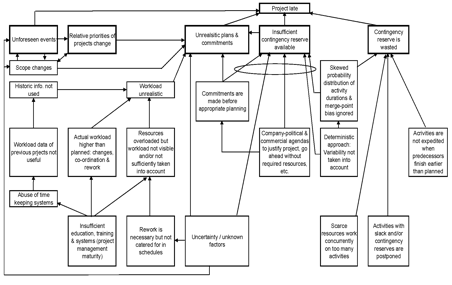 The rigor of the current-reality-tree technique for scrutinising how sufficiency of causes result in a specific effect is a laborious process but is supportive of the validation of the framework (to be performed in Step 4). Step 2 might be performed after Step 3 but, if it is performed before Step 3, it reduces the number of probable causes for further analysis and simplifies the rest of the procedure. Step 4 could involve a further round of the Delphi survey. The proof of the pudding is however in the eating and the ultimate validation is to confirm the relationship between cost and schedule performance of specific projects with the factors identified in the framework. Case study research is often criticised by researchers biased towards quantitative research. This criticism is often based on certain misconceptions12,13 and the case method can be expected to lead to support for and refinement of the framework. Once practical cases have provided sufficient support, the framework can be converted into a practical guide to ensure on-time project delivery within budget for the specific industrial sector (Step 5).

The proposed method relies on distilling relevant factors form an inclusive list compiled from wide-ranging sources such as scientific journals, methodologies, standards and other frameworks, verifying and condensing the list for a specific industrial sector, and taking into account interrelationships among several causes and effects. While the results would not be generalizable to other industrial sectors, this approach is scientifically justifiable and would provide a competitive edge for the owners of the intellectual property.

This email address is being protected from spambots. You need JavaScript enabled to view it.

Patricia Mphane
This email address is being protected from spambots. You need JavaScript enabled to view it.

Professor Herman Steyn
This email address is being protected from spambots. You need JavaScript enabled to view it.